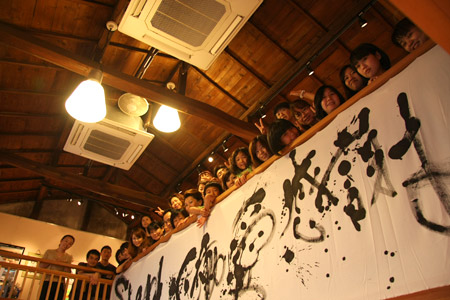 The opportunity to create the school came by a chance meeting with a woman from the Czech Republic. At that time, I had an interest in foreign countries and I spotted her note on the message board at the Kyoto International Community Center. She said that she wanted to make friends with people that were interested in calligraphy, so I contacted her.

As she was really earnest about learning calligraphy, she was looking for someone to teach her. Although my first intention was not to become a teacher, I became very enthusiastic about this great opportunity. But my friend was Czech so we had to communicate in English. This was quite difficult since I was not proficient in conveying complex ideas in English.

Yet I became very happy as little by little I saw her progress became visible. After that, I started to teach people from Australia, the US, Ireland, England, South Africa, and so on.

As I am Japanese and I naturally started to think that I would like to convey the art of Japanese calligraphy to many people from around the world.
So, if you have even just a little interest in calligraphy, please feel free to come and participate !