The expression of the beauty of words and characters in calligraphy is one of the art forms of the Far East. Characters were originally born from utilitarian needs; yet, in the process of cultural development, methods of using them to express beauty emerged.
Writing characters beautifully as calligraphy is a method of human development. In ancient China calligraphy was ranked as one of the Six Arts, namely, respectfulness, music, archery, equestrian skills, calligraphy, and mathematics.

For more than 30 years, Ai Takaoka has faithfully studied traditional models to develop the skills of calligraphy, yet she has realized that «the most essential aspect is not technique, but sensitivity».

What are you feeling now ? What kind of brushstroke do you want to create ? I think that calligraphy reflects one’s way of life. It takes more than technique alone to create expressive calligraphy if one wants to cultivate a way of living. If one wishes to express feelings emerging from daily life, this intention must be combined with the technique of creating brushwork to produce calligraphy that is fresh and alive.

Ai Takaoka considers that calligraphy is a matter of balance between black and white, between technique and sensitivity. Fostering the growth of a sense of balance involves preparing one’s spirit and employing the body to create expressive brushwork. 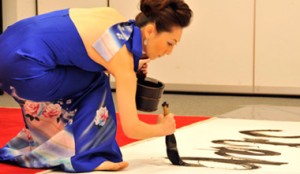